The news keeps getting worse for QuadrigaCX creditors. The Canadian crypto exchange has apparently jettisoned another $468,675 CAD worth of bitcoin into deep space.

On Feb. 6, literally, one day after Quadriga applied for creditor protection, the exchange “inadvertently” sent 104 BTC to its dead CEO’s cold wallet, according to an initial report released by court-appointed monitor Ernst & Young.

When Quadriga CEO Gerald Cotten died in India on Dec. 9, he carried into the afterlife with him the keys to the exchange’s cold wallets, where $180 million CAD—now $180.5 million CAD—worth of crypto is stored. Unless Cotten springs from the grave, any crypto in those wallets is as good as gone.

You have to scratch your head till it bleeds on that one. Why was anyone at Quadriga allowed to touch those coins after the company applied for creditor protection? EY is now moving to safeguard the remaining crypto, a stash now down to 51 bitcoin, 33 bitcoin cash, 2,032 bitcoin gold, 822 litecoin, and 951 ether, worth a current value of $434,068 CAD. Basically, more than half the money in the hot wallets is now gone.

(To get the full details on the history of the exchange, read my article How the hell did we get here? A timeline of Quadriga events.)

EY is also working to retrieve about $30 million worth of cash from nine Quadriga payment processors. So far, EY has yet to collect a dime, and one of the processors is stubbornly insisting that “it has the right to continue to hold funds in its possession pursuant to the terms of its agreement with the Applicants.”

Which payment processor would that be then? How about WB21? According to Robertson’s affidavit filed on Jan. 31, WB21 is holding roughly $9 million CAD and $2.4 million USD of the exchange’s money. Even before EY took over, WB21 was “refusing to release the funds or respond to communications from Quadriga.”

A quick Google search reveals that WB21 has long been plagued by accusations that it is a scam. A year ago, Quadriga customers were complaining on Reddit that they were having trouble getting their wires from WB21. And it also turns out, the U.S. Securities and Exchange Commission is suing WB21’s CEO for fraud. (You can find the full SEC complaint here.)

Creditors need their own lawyer

All this legal stuff is getting expensive. So far, Robertson has put up $250,000 CAD of the $300,000 CAD she promised in her affidavit to fund the CCAA process. And the funds are being gobbled up quick. Quadriga’s lawyer Maurice Chiasson said the money will run out in two weeks, if not sooner.

Chiasson: Jennifer Robertson has put in 250-thousand of the 300-thousand she’s promised to fund this process so far. But that money will run out in the next 2 weeks if not sooner.

After that, where will the money come from? Likely, out of whatever funds EY pulls from those nine payment processors.

Meanwhile, more funny business is starting to surface. In her sworn affidavit, Cotten’s widow stated that she had no dealings with Quadriga prior to Cotten’s death. Yet, three Quadriga creditors (archive) claim they received wires from Robertson’s real estate company, Robertson Nova Property Inc.

The wire transactions occurred in 2016 and 2017. This is interesting, given Jennifer only changed her name to Robertson in April 2017.

Cash delivered to your door 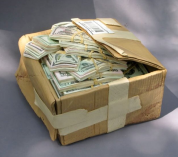 Did you know that if you wanted to cash out of Quadriga, you could opt to have actual boxes of cash dropped off at your door? That was an actual service Quadriga offered its customers. A few have suggested that the money may have come from bitcoin ATM machines that Quadriga operated.

I've been hearing more and more about @QuadrigaCoinEx users receiving significant withdrawals in the form of cash in nondescript packages by Canada Post. AFAIK, cash deposits were not an option. Why did Quadriga have so much cash on hand? @Bitfinexed #QuadrigaCX #seaglasstrust

Remember, Quadriga had no corporate banking. That is why, when you sold bitcoin for cash on the exchange or wired in money via one of Quadriga’s payment processors, your online wallet was credited with QuadrigaCX Bucks—not real bucks.

But who knew? I’ve been speaking to Quadriga creditors and some of them had no clue that the “CAD” they saw in their online wallets was basically Quad Bucks.

“Everyone knows CAD equals Quad bucks now, but I didn’t know that until after the implosion,” one creditor who preferred to remain anonymous told me. “I guess it was in the terms [and conditions], but it wasn’t marked Quad bucks.”

Some traders also told me that bitcoin sold for a premium on Quadriga. That meant, you could buy bitcoin on another exchange, such as Kraken, and then sell it for a profit on Quadriga. As an added incentive to move your crypto onto the exchange, Quadriga also offered free cash withdrawals, as long as you did not mind waiting two weeks or so for the money to hit your bank account. You had to pay a fee for express withdrawals.

Gerry Bot was pushing the price up on quad for YEARS! It was a giant carrot luring in new ignorant money into depositing BTC!

Finally, the Globe and Mail sent its investigative reporters to India, where Cotten and his wife celebrated their honeymoon just before Cotten died. People are still wondering if his death was staged. “That Mr. Cotten did indeed die is a certainty among police and medical professionals in India, and The Globe reviewed hotel, hospital and embalming records that give no suggestion of anything abnormal,” the Globe writes.

But why was Cotten’s body taken from the hospital where he died back to the hotel where he had been staying? (According to Cotten’s death certificate, Fortis Escorts Hospital was the place of death.) Partly because of this, Simmi Mehra, who works at Mahatma Gandhi Medical College & Hospital, refused to embalm the body.

The Globe and Mail report also reveals tragic details of the oft-overlooked Angel House orphanage that Cotten and Robertson sponsored. Apparently, the money they donated only paid for building materials. Several doors are still missing from the structure, including one to the toilet. And the operator of the orphanage is sinking into debt.

The orphanage appears to be yet another example of the wake of destruction that Cotten, who otherwise lived as though money were no object, carelessly left in his passing.