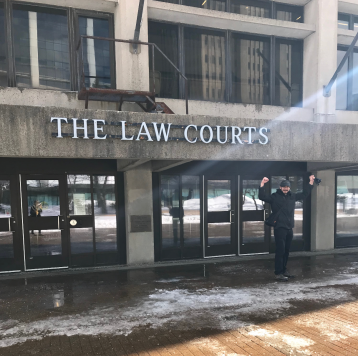 Quadriga was granted a 45-day stay from its creditor protection deadline, and the judge gave a thumbs up, albeit reluctantly, to the appointment of a chief restructuring officer (CRO).

Canada’s largest crypto exchange was granted creditor protection on February 5, after its CEO died, leaving the company belly up. Now, a growing team of professionals are working to to track down the exchange’s fund.

In front of Nova Scotia Supreme Court Justice Michael Wood on Tuesday, sat eight or nine lawyers and representatives of court-appointed monitor Ernst and Young (EY). Some had to fly in from out of town to attend the hearing. Looking at the group, you easily grasp how Quadriga’s Companies’ Creditors Arrangement Act (CCAA) has already gone through $410,000 CAD ($307,000 USD) in professional fees.

Wood asked what would happen if the stay was not extended. “I think you would have a free for all,” said Maurice Chaisson, Quadriga’s lawyer, who is with law firm Stewart Mckelvey. Chaisson described a situation where creditors from different jurisdictions would begin filing lawsuits willy nilly. Ultimately, Wood granted the stay, telling the court, he felt Quadriga was working in good faith.

When it came to appointing a CRO—a person who would relieve Jennifer Robertson, the widow of Quadriga’s dead CEO, of some of her duties—the judge was not so easily swayed. Robertson and her stepfather Tom Beazley are the only two remaining directors of the company, after a third director, Jack Martel stepped down.

“This is another cost, another burden,” Wood said. Chaisson argued that the CRO would bring value to the CCAA process, especially if Quadriga were to be sold down the line or if “the cryptocurrency search turned out to be highly successful.” (The most recent monitor’s report identified six bitcoin cold wallets that had all been emptied.) “I think the CRO, in that circumstance, would have a useful role to play,” he said.

Chaisson was not the only one to mention the possibility of selling the platform in the future. Speaking on behalf of EY, Elizabeth Pillon, a lawyer with Stikeman Elliott, said, “at this stage, We are still in the data recovery, the asset recovery mode. This might move next into the platform monetization.” She was also in support of a CRO.

Lawyers from Miller Thomson and Cox & Palmer, the law firms representing the Quadriga users were concerned with assembling a committee to represent the creditors. “We are in a bit of a bind,” Gavin MacDonald, a partner at Cox & Palmer told the court. The official committee is not yet formed. We do not have a body from whom we can receive instructions.”

Wood emphasized he did not think the term CRO was appropriate. He described the CCAA process as a search for funds, not the restructuring of a company. In a compromise, he agreed to the appointment as long as the CRO would work at the direction of the monitor to ensure there would be no duplication of work and to keep costs to a minimum. (As a note, nobody has yet said what the CRO’s hourly fee is.)

The judge also granted an order allowing the monitor to gain access to trading platform data stored in the cloud. Quadriga’s CEO Gerald Cotten kept all of the platform on Amazon Web Servers (AWS), but he kept the AWS account in his name — not the company’s name. The data is important to verifying the claims of the creditors and determining what happened to the business prior to Cotten’s death.

Jen and her step father have basically told EY and the court that they don't want to serve as directors during the CCAA proceedings. Not that they "can't," but just that it would be easier. for them.

So far just one protester, Mitch, outside the courthouse, but my guess is the storm held people back pic.twitter.com/a7R2qCWRgw