I started digging into Bitcoin ATM machines, and the research led me to write “Bitcoin ATMs—Why Vancouver doesn’t want them.” Vancouver, as we know, does not like Bitcoin ATMs. The mayor of the city wants them banned.

I suspect that the collapse of crypto exchange QuadrigaCX, which was based in Vancouver, also left a bad taste in the city’s mouth.

A source close to the matter told me that Quadriga had between two to four Bitcoin ATMs in its early days, but those were gone by 2017. The exchange was offering cash withdrawals. Where did all that cash come from? It’s own Bitcoin ATMs and later, the company had partnerships with other Bitcoin ATM operators, the source told me. 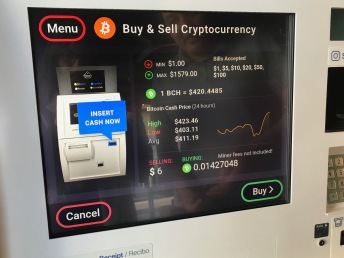 Recently, I visited a Bitcoin ATM in Los Angeles and spent time chatting with the owner of the machine. He told me that his machine charged a 7% transaction fee for bitcoin purchases—5% if you are selling bitcoin—and they only do ID checks for amounts over $280.

Bitcoin ATMs vary. Some charge up to 19%, and some only let you buy bitcoin and other crypto—no selling.

In other news, I am now the editor of ATM Marketplace and World of Money. I’ll be writing about cryptocurrency, but also covering ATM machines, money and payments in general. As long as I get to read, research and write all day, I’m happy.