The bankruptcy trustee for failed Canadian cryptocurrency exchange QuadrigaCX is now free to hand over a trove of documents—including personal information of the exchange’s users—to the Canadian tax authority.

On Tuesday, Judge Glenn Hainey of the Ontario Court of Justice issued an order authorizing EY to comply with the Canada Revenue Agency’s production demand request. Here is the order. And here is Hainey’s handwritten signed endorsement. He apparently heard the motion over teleconference due to the pandemic.

An important aspect of the order is that it also frees Miller Thomson, the law firm representing Quadriga’s creditors, and the Committee for Affected Users, who speak on behalf of all of the creditors, from any liability.

EY will now be handing over 750,000 documents to the CRA. Many of those documents contain personal information on the 115,000 users who were active on the exchange at the time of its collapse in January 2019.

Quadriga’s creditors are not happy about this. Losing control of their personal data is their worst nightmare. But as I spelled in a previous post, the cost for the creditors to fight any of this would have been prohibitive. It also would have further delayed them getting back any of their already dwindling pool of recovered funds.

Hello new readers! If you enjoy my crypto meanderings and paywall-free Quadriga resources, please subscribe to my Patreon account. I’m an independent writer, and I need your support. You can subscribe for as little as $2 a month.

I will be giving a presentation on Quadriga at MPWR Crypto Mining Summit in Vancouver, B.C. on March 12 at 4:15 p.m. local time. If you lost money on Quadriga, you can get into the event for free. Simply send an email to community@biresearch.ca.

I’m obviously insane to have driven to the Quadriga hearing in Halifax on March 5, given the weather conditions. I went with fellow crypto-skeptic Kyle Gibson. We spun off the road twice. It was horrifying. Apparently, my car was burning oil the entire way.

On the upside, seeing the hearing live at the Nova Scotia Supreme Court was really cool. Also, while in Halifax, I interviewed with Sheona McDonald, who is working on a Quadriga documentary. I hope to see her again in Vancouver, where she is based.

As far as the hearing goes, the big news is that Quadriga was granted a 45-day stay and the judge gave a thumbs up to the appointment of Peter Wedlake, a senior vice president and partner with Grant Thornton, as a chief restructuring officer (CRO) for the firm.

I was struck by the number of paid professionals sitting before the judge—somewhere between eight and nine, and a few others in the back of the room. What is the hourly rate for a lawyer? And some of them had to fly in, too.

And now, one more mouth to feed: the CRO. According to court documents, Quadriga needs a CRO for “ongoing direction” related to its affairs during its Companies’ Creditor Arrangement Act (CCAA) and in the event of an “anticipated sales process.”

This talk of selling Quadriga is a recurring theme, so watch for it to come up again. The biggest value in the sell would likely be Quadriga’s user base. A similar effort is being made to revive Mt. Gox, the Tokyo-based crypto exchange that went bust in 2014.

The law firms for Quadriga’s affected users have so far heard from 800 creditors—not a lot, when you consider there are 115,000 affected users. But keep in mind there is no formal claims process at the moment.

in the courtroom at the Quadriga case, a reporter who came in late and sat behind us told us during intermission, "I know a few dozen people who lost mone on #QuadrigaCX; around $200, you know…nothing to go to great lengths over getting back…"

How will customer claims be evaluated? Court-appointed monitor Ernst and Young (EY) is working to gain access to the exchange’s platform data in AWS, where all the customer trades are located. (EY had to get a court order at the hearing to do so.) It will be interesting to see what the monitor finds when it cracks that egg—maybe nothing. Other trails have already been wiped clean. Quadriga has no books and six identified bitcoin cold wallets were found empty, except for an inadvertent transfer reported earlier.

I recently wrote about WB21, the shady third-party payment processor that is holding $12 million CAD ($9 million USD) in Quadriga funds, according to court documents submitted in January. After I published the story, WB21, threatened me with legal action. I responded by posting the documents they sent. Since then, I’ve been getting anonymous threats via social media and email, telling me to stop talking about Quadriga.

1/4 – WB21 sent me an email accusing me of defamation and threatening me with legal action if I did not immediately make changes to my WB21 article.
My original article: https://t.co/7DFAT1Xird
WB21 full letter: https://t.co/Mr1KVKOR0V
WB21 amended doc: https://t.co/ejVOUFpnvK pic.twitter.com/h1e9VQaY6E

Kyle Torpey wrote how bitcoin users in Canada are being targeted with audits by the Canada Revenue Agency (CDA). It is possible this could deter some affected Quadriga users from registering their claims, particularly if they are worried about anyone finding out about their crypto investments.

Bitcoin users in Canada are being targeted with audits by the Canada Revenue Agency (federal tax agency). Attached are some images of the questionnaire being sent out to individuals in relation to the audits.

Elsewhere in the news, Kraken is offering a reward for any info leading to the finding of Quadriga’s lost coins. The US-based crypto exchange writes:

“It is up to our sole discretion which tips warrant a reward, if any. The total of all rewards will not exceed $100,000 USD. Kraken may end this reward program at any point in time. All leads collected by Kraken will be provided to the FBI, RCMP or other law enforcement authorities, who have an active interest in this case.” 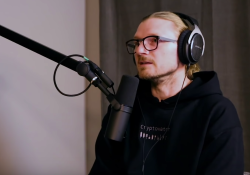 Kraken’s CEO Jesse Powell has done two podcasts talking about Quadriga. Why is he so interested? If you recall, Kraken acquired Canadian crypto exchange Cavirtex in January 2016, so it has some Canadian customers. A few people I spoke with speculated that Kraken may have an interest in acquiring Quadriga’s user base. Otherwise, $100,000 USD seems like a lot of money to throw around for an exchange that let go of 57 people in September.

In a bear market where dozens of employees were laid off recently, isn't it a bit odd that Kraken are throwing around a $100k reward for this Quadriga thing? That's a big expense… what's the ROI for them? https://t.co/wGUgt0kT5j

After this post went live, Powell sent me a few comments via email. He assured me the only purpose of Kraken’s reward was to help locate more assets for the Quadriga creditors and uncover any potential foul play. I reminded him that EY is already doing its own investigation into the lost funds. As of yet, Quadriga is not a criminal case.

As for acquiring the Quadriga platform and its user base, Powell thinks the platform is worthless and the user base probably significantly overlaps with Kraken’s already. “We would be open to acquiring the client list, but it wouldn’t be for much,” he said.

He also pointed out that “a lot of money” is relative and unrelated to his firm’s earlier layoffs. “Kraken increased its profitability in September,” he said. “Would you think $100,000 USD was a lot for Amazon, who let go a few hundred people last February?”

Lest there be any lingering doubt, Globe and Mail posted convincing evidence linking Quadriga cofounder Michael Patryn to convicted felon Omar Dhanani. The two appear to be one and the same. I think we can lay that one to rest now.

Meanwhile, The Block wrote about Patryn allegedly trading large positions on BitMEX, an unregulated exchange that lets you bet on whether the price of bitcoin will go up or down. You place all your bets in bitcoin, and you can leverage up to 100x. It’s a great way to risk losing all of your money. (I wrote about BitMEX for The Block last year.) There’s been speculation as to whether Patryn was gambling with Quadriga’s customer funds.

Can anyone confirm this? https://t.co/zOWPshhG6R

Earlier, Coinbase also brought up the possibility that Quadriga was operating a fractional reserve after the exchange suffered multimillion dollar losses in June 2017 due to a smart contract bug.

Wanted to share a summary of what we believe happened to QuadrigaCX. We did our own internal research, including some blockchain analytics, to see if we could help. Important to note that this is just our best guess. Take it as *pure speculation*, nothing more.

Bottom line: anything is possible. Nobody knew what was going on inside Quadriga — and they still don’t. The exchange had no official oversight and as of early-2016, only one person was in charge of that platform and all the money it held, and that was Gerald Cotten, the exchange’s now deceased CEO.

More information will come out as EY continues with its work. I can only imagine the private conversations occurring between the accountants (and lawyers) as more details in the CCAA process emerge. Welcome to crypto!

Read “How the hell did we get here: a timeline of Quadriga events” for the full story.