The now-defunct Canadian crypto exchange QuadrigaCX was founded in November 2013. Where did its co-founders, Michael Patryn and the now-supposedly-deceased Gerald Cotten, first meet? Did they  exchange pleasantries in the Vancouver Bitcoin community earlier that year? Did they meet online in some bitcoin chat forum? Or did they have other prior business dealings even further back?

New evidence uncovered by Reddit user QCXINT suggests that Cotten appears to have been involved with Patryn at Midas Gold, a Liberty Reserve exchanger, set up by Patryn in 2008.

Formerly Omar Dhanani, Patryn is a convicted felon who was arrested in connection with online identity theft ring Shadowcrew.com in October 2004. He was 20 at the time. Working out of his parent’s home in Southern California, he was a moderator on the forum. He also offered forum members an electronic money laundering service. Send him a Western Union money order and—for a fee of 10% of a transaction—he would filter your money through E-gold accounts. E-gold was an early centralized digital currency. Dhanani served 18 months in a US prison and was released in 2007.

After the US deported him to Canada, Patryn picked up where he left off. In April 2008, he founded Midas Gold Exchange. He was listed as the company’s sole director under “Omar Patryn,” with a company address in Calgary—though he was living in Montreal at the time. A few months earlier, the digital currency exchange service launched on M-Gold.com. (Here is an archive of the site taken in its early days, and here is an archive showing an updated design taken just before things took a dive).

In January 5, 2008, the earliest entry on the website reads:

“We have finally launched this website, and are requesting that clients place all future orders through the Contact Us page. We have, of course, been in business since 2005 and hope to continue providing you with the same great service throughout the new year. Thank you once again for your business, and have a happy New Year!”

There are no names of actual people anywhere on the site. But an October 17, 2009, entry gives the impression that a whirl of activity is going on behind the scenes.

“We apologize for the delays experienced for many clients during the course of this week. We are currently undergoing a massive corporate restructuring. During this time, some exchange directions are temporarily disabled. All pending orders should be processed within one business day.”

A Costa Rica-based centralized digital currency service, Liberty Reserve was like PayPal for criminals. You could use it to anonymously transfer the system’s digital currency LR, worth $1 apiece, to anyone who had an account on the system. The system served millions of users around the world before May 2013, when it was shut down by the U.S. government.

To set up an account on libertyreserve.com, all you needed was a valid email address. You could make up whatever fake name you wanted because the site had virtually no KYC/AML to validate identities. You could, literally, use the service to send huge amounts of money around the world without anyone batting an eyebrow.

LR exchangers would buy LR in bulk and sell them in smaller quantities, typically charging a 5% transaction fee. This setup allowed Liberty Reserve to avoid collecting banking information on its users, which could leave a financial trail—exactly what criminals want to avoid when choosing a digital currency.

Founded by Arthur Budovsky and Vladimir Kats, Liberty Reserve went into operation in 2005. Eight years later, the system had more than 5.5 million users worldwide and processed more than $8 billion. Most of that volume came from the U.S.

During 2009 to 2013, Liberty Reserve was in full swing. These were the sunshine days of its criminal activity. A huge number of transactions were related to high-yield investment programs—better known as Ponzi schemes—credit card trafficking, stolen ID information and computer hacking.

A data dump—in one of the USA v. Kats et al. court exhibits (see attachment #180 for GX 1305) related to the takedown of Liberty Reserve—shows that Midas Gold ranked 342 of the top 500 Liberty Reserve accounts in volume.

The name on the Midas Gold account is Omar Patryn, but the email address linked to it is geraldcotten@gmail.com. What does this mean? It means whoever owned that email had the authority to operate the Midas Gold account for Liberty Reserve. They could reset the password, enable or disable 2FA, and authorize transactions.

The data indicates Midas Gold bought up more than $5 million worth of LR. At 5% of a transaction. That equates to profits of around $250,000—not a lot, but decent wages.

The email suggests that Cotten and Patryn may have worked at M-Gold.com together—though its not clear if Cotten was involved from the beginning or joined later. If anything, this could even suggest that Cotten had more control over Midas than Patryn.

Let’s pause for a moment. If you were going to be involved in a dodgy business, why would you use an email address that pointed directly to you? That seems like a dumb thing to do, but then Cotten was still a young con at this stage. Maybe this was a rookie mistake. Also, is this really Cotten’s email? Quite likely, yes.

We think this is his email because he appears to have used the same email address for several domain registrations, including, cloakedninja.com, where you could buy proxy sites to hide your IP address, and celebritydaily.net, an entertainment news blog. A historical WHOIS data snapshot of these site reveals they both have a registration address of 346-1881 Steeles Ave W Toronto. Quadriga Fintech Solutions, the owner and operator of QuadrigaCX, is linked to the same address.

In addition to the Midas Gold account, Patryn had his own account on Liberty Reserve, but his account had no associated website. He appears to have had at least three other exchangers at the time—HD Money, E-cash World and Triple Exchange. It’s possible he was selling LR through those sites as well as Midas Gold, and was just using the one account. Or else, Cotten could have operated Midas alone, while Patryn handled the other businesses.

Approximately $18.4 million worth of LR went through Patryn’s Liberty Reserve account. Of Liberty Reserve’s 500 largest accounts by volume, his ranked 88. If he took a 5% cut of every transaction, he would have pulled in $920,000.

A passage from the court filing explains:

“Data obtained from Liberty Reserve’s servers reflects the extensive use of the company’s payment system by criminal websites. The Government analyzed the top 500 accounts by transaction volume, i.e. funds sent and received, to attempt to determine the type of activity associated with each account. The total transaction volume for these accounts is approximately $7.26 billion, or approximately 43% of the total volume of transactions on Liberty Reserve’s entire system.”

Also according to the analysis, of the top roughly 500 accounts, 44% were associated with exchangers, 18% could not be categorized, and the remaining 38% were categorized as follows:

“157 of the accounts, accounting for approximately $2.6 billion in transactions, were associated with some form of purported ‘investment’ opportunity. The vast majority of these accounts were linked to websites that, on their face, were clearly ponzi schemes, i.e., HYIPs. Others, at best, were associated with unregulated ‘forex’ (foreign currency trading) websites—which are likewise known to be prominent sources of fraud.”

The demise of Liberty Reserve 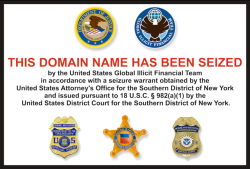 Good things never seem to last, and in May 2013, Budovsky was arrested in Spain for running a massive money laundering enterprise. Kats was arrested in Brooklyn, and the the domain libertyreserve.com was seized.

Shortly afterward, US authorities seized more than 30 domains registered as Liberty Reserve exchangers in a civil forfeiture case, including M-Gold.com. According to court docs: “The defendant domain names were used to fund Liberty Reserve’s operations; without them, there would not have been money for Liberty Reserve to launder.”

Following the shut down of Liberty Reserve, users were told to contact the court to recoup their lost funds—on the basis they were conducting legitimate business. According to court docs filed in April 2016: “Notwithstanding that Liberty Reserve had more than 5 million registered user accounts, only approximately 50 individuals have contacted the Southern District Court of New York since May 2013.” Most appeared to be victims of HYIPs and other scams. And only one Liberty Reserve exchanger contacted the court about a potential claim—and that claim was not pursued.

A few months after M-Gold.com was seized, QuadrigaCX launched in beta. The rest is history—or history in the making—depending how you look at it.

Did you like this story? Please support my work on Patreon, so I can keep on doing it.